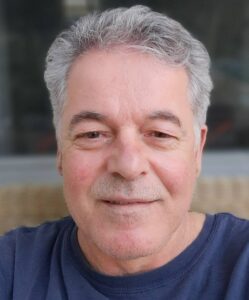 I was born in Devon, England and raised in Petrolia, Ontario. In 1983, armed with a Bachelor in Interior Design from Ryerson University (Toronto Metropolitan University), I started a not-for-profit painting and super-graphic company, then worked as a scenic artist/set painter for feature films and commercial productions. In 1987, I launched Baker Design Build in Toronto and spent the next 15 years renovating and restoring retail operations and residences in the city. Since 2002, Baker Design Build has been based in Meaford, Ontario.

My two boys grew up here, and along with coaching soccer, I became involved with the “Kids in the Meaford Hall”, which produces an annual Christmas-season play featuring youth actors. Each year, 1,000 elementary school children attend the performances free of charge. I produced the event for 10 years, but, naturally, I also dove into and really enjoy designing and building the sets.